FAIL (intransitive verb); to fall short, to be unsuccessful

Most of the people who know me have long since realised I don’t do transitional material. I’m also not great at light conversation. I’ve been told of my tendency to go of on a (ranting) tangent on whatever subject has prodded me with a stick. So, I hope you’re ready for a little random venting of spleen here, for there is a recent societal undercurrent that is increasingly sticking in my craw, namely the tendency in today’s world towards what can only be termed ‘denial of failure’. When did ‘Fail’ become a four letter word? 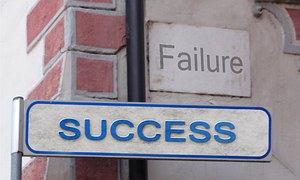 I’m not sure when or where it started…I’m tempted to start with the so-called ‘millennials’ and work my way down the age ladder a few years but that is for a different post. What I increasingly see in primary and secondary education is the inability of grown-ups to understand the fundamental difference between ‘wants’ and ‘needs’. Students are to be given what they want – not what they need. Yes, I know, this goes clearly into the swamp of relativism, e.g. who is to say what is needed. Let me avoid this for the time being, not because it’s uninteresting but because it is somewhat beside the point.

The point is this: since when have we teachers acquiesced to having our time appropriated by grade discussions? I don’t mean going through a test and explaining the boundaries and why marks are given/withheld, but the time-consuming discussion during organised meetings with students and frequently their parents as though we are haggling over the price of a gourd at the bazaar? I mean, really. What has happened? Those of you who have been in the game for a few decades, surely you have seen a dramatic shift if attitudes? I had one highly experienced colleague tell me about student/parent talks 20 years ago compared to now; the stance has markedly shifted from “…what does Johnny need to do to get a higher grade…on the next written evaluation…” to “…why hasn’t Johnny received a higher grade now…and what can he do to make up for it and change the grade on this current evaluation…”

I too have increasingly seen this in schools. Somewhere along the line we grown-ups – school leaders, parents, teachers – started denying that students could fail, either through rubberised grade boundaries, deadlines that could be moved, re-weighting of tests or other standardised components and — possibly the most pernicious and hard to address issue – simply by allowing successive and endless ‘re-takes’ and ‘do-overs’. It is this last one that seriously yanks my chain, when a situation arises where school policies of keeping fail rates down coupled to students’ and parents’ expectations of high grades often lead to the most damaging results for students in the end.

Here is the general scenario: it’s time for mid-term parent-teacher talks, Jane comes in with her parents. Jane has received a weighted average of grade 3 on tests, quizzes and Internal Assessment (IA). The parents sit down, Magister goes through an Excel spreadsheet pointing out scores and also the weighting system, say 30% for quizzes, 50% for end of term tests and 20% for IA. There is now a good chance that parents will ask a) why the end of term tests are so heavily weighted (answer: because THAT is how students will be graded in the IB), and; b) which of the components Jane could make up for in order to push her mid-term grade (answer: NONE…because that ship has sailed!)

Wait….come back! I have a ticket!

It is here I have noticed a most frustrating development in the past few years; students and parents seem to think there is a never-ending array of ‘fill-in’ tasks to attain the grade they want. This simply cannot be, I mean, all ideological arguments aside, do the maths: 80 students where 20 get grades they feel are too low and Magister now is to put together and correct an end of term test and an IA for them all. Apart from going against IB rules on IA, the sheer practical issue of time – and the likelihood that other students jump on the grade-up bandwagon “…because Jane was allowed to…” – is simply not realistic. Not to mention the situation we ultimately wind up in due to rampant grade inflation where grades cease to matter as both indicators of achievement and a method to earn university entrance. Yes, I am avoiding all the philosophical issues herein – again, that’s another post.

Here are several possible reasons for this trend:

The end result must inevitably be an inflated sense of achievement and entitlement, something that will come to a screeching halt when final IB results are in. (Again, part of the problem being that for students being accepted to university on term results, this matters not at all.) Endless retakes, grade inflation and concomitant inability to fail. I really do wonder if this is a major element in the on-going debate at US and UK universities re ‘safe rooms’, ‘trigger warnings’ and quite alarming curtailing of what should be the bulwark of university fibre; free speech, free thought and pushing the boundaries. Just enter ‘Bill Maher + Berkeley’ and ‘Jonathan Haidt + coddling’ into Youtube search for example. Scary scenario indeed.