It has escaped none of my students that our subject is a ‘composite’ subject – including (but in no ways limited to!) mathematics, history, political science, statistics and…well, stories. I always try to get across that the ability to become a good economist rests on two foundations; 1. good solid understanding of basic concepts and terms, and; 2. skills such as underpinning arguments, finding flaws with economic reasoning and simply being clear in putting forward economic scenarios both verbally and written. 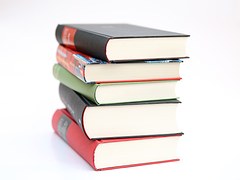 Book stacking! Ghostbusters must be around.

At the heart of the matter is simply reading textbooks. Somebody put in a lot of effort into the text before you – and one might safely assume that the author has some experience in teaching the subject. Yes, textbooks are different and authors explain things differently – and that is exactly why you should have several textbooks available! Reading the same basic concept – say, the difference between ‘change in demand’ and ‘change in quantity demanded’ – in different books forces you to think think through the concepts clearly since the two books will explain the same thing but using different paths to the end. If you can somehow follow both paths (knowing that the end-game concept is simply shifting the demand or supply curve) then you will have strengthened your understanding of this core use of economic terminology.

One of my many ambitious students, Vic, always got fair to middling grades initially – which then noticeably started to climb over the course of the first year. He went from 4/5 to 6/7 during the spring term. When he then got the highest score in school during mock exams, I made a show of asking him in front of his classmates – embarrassing him a bit of course by asking how he had gone from 4s to 7s. His answer is one that I know use in my IB1 introduction to my students: “I read. If I don’t get it, I read again. Basically I read my textbooks until I understand the basic concepts and principles.” Yes indeed, it’s the old ‘If at first you don’t succeed, try and try again”. (Far better than my father’s version when our VW broke down and he couldn’t fix it: “If at first you don’t succeed, get a taxi.”)

Note the plural above, e.g. “…textbooks…” Vic made sure he had several different textbooks, paid for with his own money, so he could try a different author’s explanation. He actually helped me a lot since, as an author myself, he explained how it looks for a 17 year old on the other side of the book fence – and I honestly admitted to him that I could well understand how he go to different textbooks for different reasons. There was no single textbook that was ‘best’ in all respects. Diagrams, explanations and scenarios will be different and it is up to you to find out which suits you best for different purposes. It’s really no more different than your teachers using different sources for different classes – or indeed for different students!

But the basic issue is simply reading. Basic reading should get you the understanding to obtain a grade 4. Yes, really. I often get some push back when I say this but frankly, anyone who has done economics and history at a European university knows that many courses basically start with the intro “Here’s your list of required reading, here’s a schedule for lectures and here is the date for finals. Good luck!” I know a good many students at uni that spent a lot of time at the university pub and no time at all in the lecture hall. Some of them passed and of course, barring osmosis, the only way for them to have at least passing level knowledge was to read a lot of books.

I am writing about this because I increasingly see that students don’t want to spend time actually reading through a book – instead they want ‘the questions and the answers’. As though this actually means they learn economics. In a world where bookshops and news agents are closing at alarming rates, and where most things can be found at one’s fingertips online, it is no mystery that students are downloading Cliffsnotes-like material to lessen the workload. Bit-sized chunks and snippets of information aimed at a very specific area of the syllabus…this is not learning but a very simplistic tactic. I warn my students that the higher grades in economics come from a broad spectrum of true reading plus in-class participation where basic knowledge and understanding is honed to an edge via discussion, debate and practising to put together well underpinned lines of reasoning. Far too often these days I get lots of opining and heated debate but without the students actually having the fundamental knowledge to add weight to arguments. Simply put; we teachers seem to be encouraging students to debate, discuss and argue (which is good!) but we take for granted that students in these discussions have actually put in the pre-requisite time reading. Increasingly this seems to not be the case, as atomised and snippet-form economics is ingested via apps rather than the time-consuming reading of complete sections – or even paragraphs.

Having said that (you know there would be an “…on the other hand…”, right?!), clearly there are other media! I use lots of movies and film clips to illustrate and provide a bit of flesh on the endo-skeleton of knowledge. Next time I will review my favorite films and series dealing with economics. Until then, I repeat; read! Everything you need to know is in your textbook.