Assuming that you’re on this site because you’re interested in the kind of reading and writing that your literature and language courses may or may not involve, these three (or maybe more) blog entries will be looking outside and inside of conventional ‘English class’ materials to provide new directions and unpack some older ones.

Widening our sense of graphic novels

Take a look at these four graphic narratives.

A Game for Swallows

Born in the midst of the Lebanese war when the city of Beirut was divided between Christians and Muslims, Zeina Abirached narrates a single day of her life in the midst of turmoil. Told through a child’s perspective, the memoir depicts the day Abirached’s parents are stranded on the Muslim side of town due to the fighting. She and her brother find comfort among their neighbors and friends as they await the end of the bombing that creeps closer to their home and hope for their parents’ safe return. Translator Edward Gauvin has written about the book, including the translation challenges, on his blog.

The Re[a]d Diary is an experimental novel that combines the two scripts of Teddy Kristiansen and Steven T. Seagle based on Kristiansen’s drawings. Kristiansen’s original story is of a man retracing the history of a forged painting through long-lost diaries of the artist. Before translating Kristiansen’s story from Danish to English, Seagle wrote his own using the same images about a man re-creating his history from the long-lost diaries of an artist. Both stories share a common theme of discovery, art, and movement through time between World War I and the present, connecting the story through identity, art, and setting. 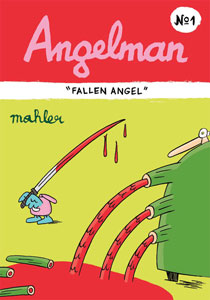 Angelman is a superhero who works at Korporate Comics; his superpowers include open-mindedness, sensitivity, and being a good listener. His days consist of trying to please his boss, fighting his arch-nemesis, Gender-Bender, and maintaining his marriage with his wife (who looks a lot like him). A hilarious take on superheroes and the large comic book companies that own them, Mahler narrates a witty account of what a superhero’s life would be like. Among his satirical accounts of serial storylines and superheroes, he includes the executives, writers, and creators at comic book companies.

In desperate need of money and a place to hide after butting heads with a loan shark in the corrupt city of Cairo, Shehab’s only option is to rob a bank. Enlisting the help of his friend Mustafa, Shehab plans a heist that exposes the corruption within the Egyptian government and financial district as he discovers a conspiracy that involves the upper reaches of the regime. Filled with action and sociopolitical commentary, Magdy El Shafee’s Metro portrays an Egypt on the brink of explosion even as he explores the need for a better, and freer, world. The book has been censored in Egypt. Chip Rossetti talks about the challenges of translating graphic novels in an interview on the Arabic Literature (in English) website.

Thanks to the work of: Melissa Weiss, a World Literature Today intern. (October 9, 2012)

Next installment: The Outsider–The Stranger? What’s the best translation the title of Camus’ L’Etranger?